Parisienne Proposal in the City of Love 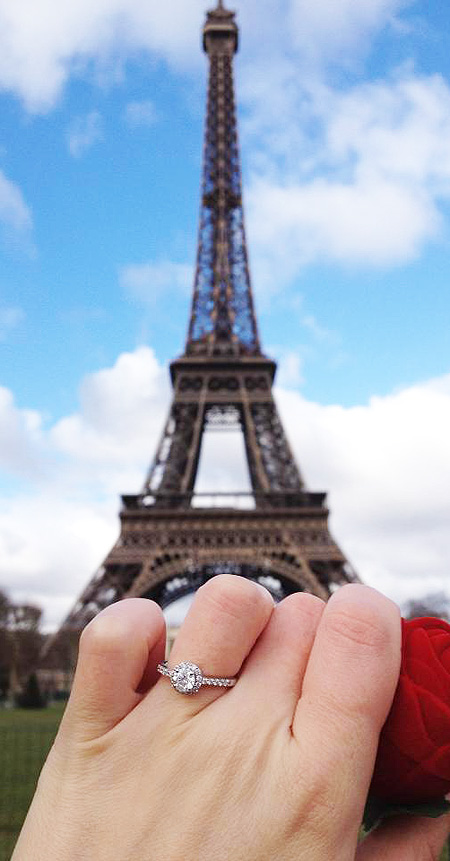 The Parisienne proposal is certainly a great choice and a wonderfully romantic idea. When asked which City was most closely associated with romance, it would probably be Paris. Amongst a few other European cities, Paris represents one of the perfect locations for a surprise proposal. The city embraces love, art and culture and remains one of the greatest romantic escapes. Paris is a beautiful city. It has a very high concentration of exceptional architecture, museums and galleries. It also has a charm created by cobbled streets, city squares, cafés, boutiques, delicatessens, restaurants. The list goes on. Furthermore, Paris boasts some of the World’s most famous landmark monuments such as the Eiffel Tower.

Our client Steven was kind enough to send to us this photograph of his Parisienne proposal. He has kindly allowed us to feature it here. With careful planning and organization, the weekend began with a stopover on the Friday night before being dropped off in ‘London’ for the weekend.  The next morning the journey began at Kings Cross station for their surprise journey to ‘Paris’ on the Eurostar.  The look of shock & excitement on Jen’s face was described as fantastic.  Upon arrival in Paris they checked in at the hotel before walking to the Eiffel tower where the proposal took place.  It was just a perfect start to the weekend away with her saying yes before heading off to a restaurant for an early lunch and a stroll around a few of the other Paris landmarks.

We thought today’s blog post and picture would make a perfect addition to help others with inspiration for arranging the perfect proposal. With the Eiffel Tower standing proudly in the background there is no mistaking the famous setting. We think this is certainly a fantastic way to compliment the beautiful diamond halo engagement ring and few cities can do this better than Paris.