On November 10th, one of the rarest natural pink diamonds will be auctioned alongside some of the most Magnificent Jewels at Christies, in Geneva.

The estimated value of the diamond has been set at 23 – 28 million US Dollars. Previously purchased 10 years ago, the item is currently owned by a US client who has reportedly seen its value double in the time that he has owned it.

The Pink Rolls-Royce of Diamonds

The fabulous 16.08 carat pink diamond is the largest pink cushion shaped diamond to be auctioned and features a double row of pavé set white diamonds contrasting with the pink diamond. A third additional row of pink diamonds feature around the ring above the diamond set band, crafted in Platinum.

The diamond has been described as the ‘Rolls-Royce of diamonds‘ and is equivalent in size to a postage stamp.

Natural pink diamonds regularly feature within the news, reaching record prices at auction.  Unlike most natural pink diamonds which possess a second colour modifier, this particular stone has no secondary colour – further adding to its beauty, rarity and value.

The stone has an even distribution of colour, a balanced saturation and tone and straight pink hue – resulting in the attribution of ‘Fancy Vivid’ as graded by the Gemological Institute of America.

The Origin of Pink Diamonds 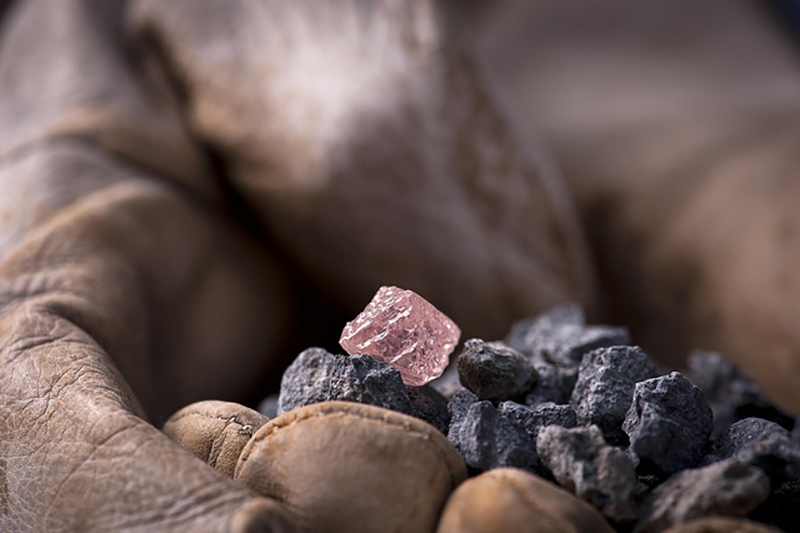 The best from each year’s production of pink diamonds are cut and polished in Western Australia and sold through the annual Argyle Pink Diamonds Tender. Of the hundreds of millions of diamonds produced by Argyle each year, only the best 60 or so are included in this prestigious sealed tender.

Pink diamonds tend to be cut into shapes that concentrate the intensity of colour –the cushion cut remains a favourite with diamond cutters looking to enhance the attributes of the diamond.

“As large and rare colored diamonds of this caliber become increasingly hard to locate, this 16.08 carat Fancy Vivid pink diamond comes to market at a time when great gems are mirroring prices achieved for masterpieces in the world of fine art. Collectors are looking to jewels as savvy investments that are both beautiful and can appreciate considerably in value over a relatively short period of time.”