Photo shows the visibility of a small feather seen below the table facet of an Emerald cut diamond.

Study most GIA diamond grading certificates and you will often see words such as ‘feather’ or ‘twinning wisp’ for clarity characteristics within the diamond or extending into the stone from the surface (inclusions), unless graded Internally Flawless.

A-Z of Clarity Characteristics of Diamonds.

Please note that most of the following clarity characteristics will usually be very discreet, many only visible with a 10x lens and a trained eye. When appearing on a diamond certificate they merely identify and specify the type of inclusion.

Often formed as a result of the manufacture and cutting of the polished diamond. Microscopic feathers extend from the surface of the girdle (outer edge) into the diamond.

A small mark on the diamond, resulting from impact, which extends into the diamond, below the surface of the stone. These small marks often appear where two facets meet where the diamond is more exposed to damage.

Where part of a feather (see below) breaks away from the diamond, a small crack-like opening, the cavity appears.

Impact, or pressure can cause diamonds to chip. Chips are damage and can vary in size and shape, but typically appear as breaks in the stones surface, often seen at the point of the diamond, edge of a facet or culet of the stone.

Clouds are formed by much smaller inclusions grouped in one area. Alone they are too small to be readily visible, but together they are more noticeable but of a more foggy and less distinct.

A white inclusion, feather-like in appearance, (hence the name) usually formed by a fracture within the diamond.

Caused by distortion of the diamond crystal, appearing either as light, or darker markings within the diamond usually thread-like or of pin-point appearance.

Lines, Curves and inclusions appearing at angles. Can be white, coloured or semi-transparent, caused by irregularities during diamond crystal formation.

This is a transparent included diamond crystal present within the diamond itself, extending to the surface following the process of cutting and polishing.

This type of inclusion appears as thin, needle-like inclusion, which can vary in length.

A small dot-like inclusion, within the diamond.

“A series of pinpoints, clouds or crystals that forms in a diamond’s growth plane ; associated with crystal distortion and twinning planes.”

How do Diamonds form and why are some more included than others?

Diamonds form in various environments, which accounts for the differences in colour clarity and size.

Are there some Diamond inclusions that are worse than others?

Black spots, cavities and chips are all inclusions which are more likely to be visible. This is because they can be larger and darker. Black spots can look like frogspawn in some people’s opinion, just to give you an example. Chips within a Diamond, however, will alter the outer appearance of the Diamond more than anything. They may also weaken the structure of your Diamond if they are in the wrong place. You can visit our previous blog post on Diamond Clarity Characteristics for more information on the various Diamond inclusion types.

Position of Inclusions within a diamond

Diamond inclusions on the table of the Diamond are going to be more visible, and therefore less desirable. You may not find this a problem, however. Most jewellers tend not to sell Diamonds with table inclusions for this exact reason. Diamond inclusions further into the Diamond can have both pros and cons too though. They can be well hidden within the facets. But, if they are in just the wrong place, they can be reflected in the other facets. This can make it look like one inclusion is multiplied many times. Some Diamond inclusions are strategically hidden by claws, too.

Diamond inclusions are less visible in some cuts of Diamond. Emerald cuts, for instance, are ‘honest’ stone cuts. Inclusions are not easily as hidden in an Emerald cut as it has fewer facets. On the other hand, Round Brilliant cut Diamonds are more likely to be able to ‘hide’ inclusions. This is because they have more facets.

Diamond inclusions are often referred to as Diamond characteristics. This is because Diamond colour and clarity can vary depending on the person grading them. A universal standard is adhered to, but this can differ ever so slightly from laboratory to laboratory. For Example, GIA (The Gemological Institution of America) tend to be very exacting with their grading. 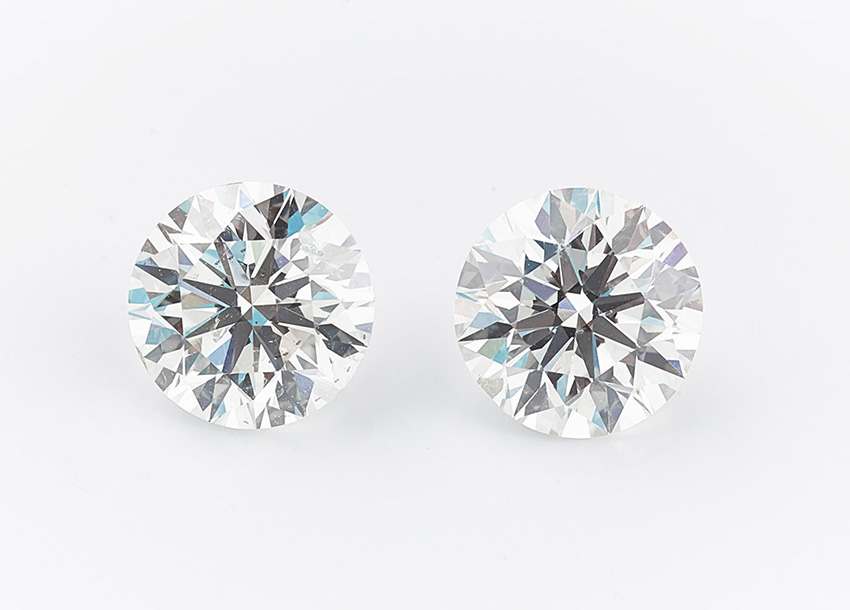 For more information don’t forget to stop by our diamond education section of the website.